The Life Sciences Centre (LSC) is the largest building on the UBC Point Grey campus. Completed in 2004, this $125 million, 52,165 square meter building was built to accommodate the Distributed Medical Educational Program—which has nearly doubled the number of yearly medical school graduates in the province since its inception. Due to the building’s size and the density of research activities hosted, the LSC consumes roughly 10% of the campus’s energy.

In 2021, a third chiller module was added to an existing two-module heat recovery chiller. The original chiller modules were installed in 2015, and it has since been observed that there is more recoverable heat in the building. An energy study was conducted that determined a three-module chiller would be the optimal size, resulting in the lowest life cycle cost to UBC.

This additional chiller module recovers 5800 GJ of heat per year, equivalent to reducing thermal consumption by 21%. Additionally, this project is expected to reduce the building’s GHG emissions by 166 tCO2e per year.

Since 2012, our Energy Conservation & Innovation team has worked to dramatically reduce energy consumption in this building. As of 2018, we have reduced this building’s energy consumption by 37%; saving the University over $600,000 annually in energy costs and reducing GHG emissions by 2100 Tons. This is the equivalent of taking 464 cars off of the road! 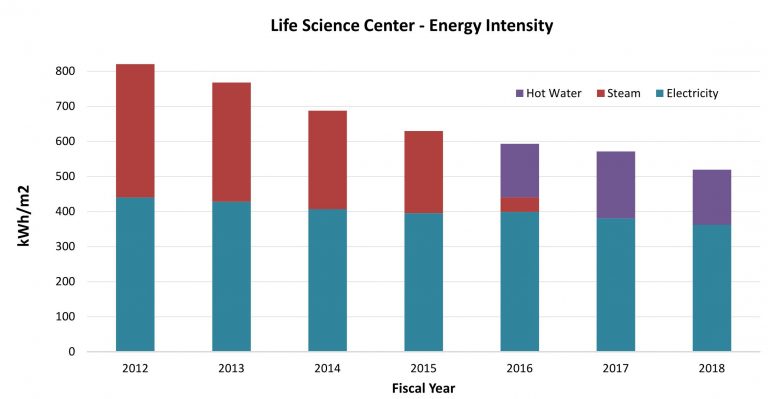 In 2017, further optimization initiatives were undertaken at Life Science Centre, these initiatives include getting the building up to current standards in terms of laboratory airflow rates and implementing a static pressure reset on the main fan systems. Airflow rates in the building were updated to UBC’s current standard of 8 ACH (air changes per hour) during the daytime and 4 ACH (air changes per hour) at night. A static pressure reset on the main air handler fans was implemented, so that the fans static pressure responds to building demand.

Combine, these two measures have saved 750 MWh of electricity and 2800 GJ of natural gas annually.

Overall, all of these measures have reduced Life Science’s energy intensity by 37%, roughly 300 kWh/m2 per year! 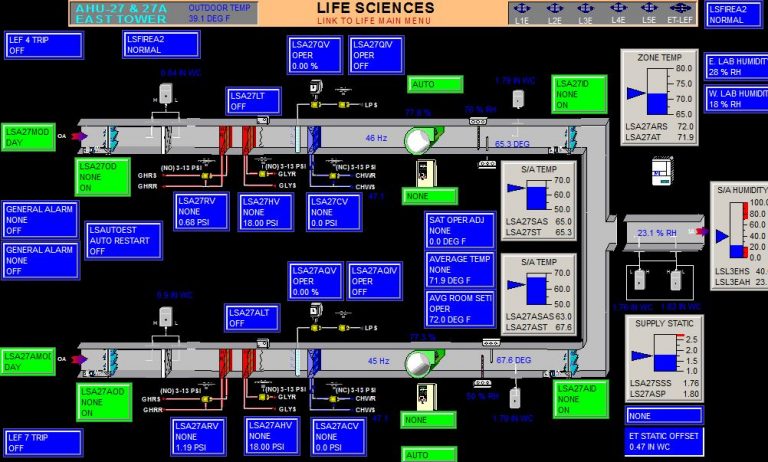 The control sequences for AHU 27,serving the East Tower at LSC, was one of three air handling units updated with a static pressure reset control strategy.

Starting in March of 2016, optimizations to the building’s exhaust system were undertaken. Life Science Center was one of a number of buildings across campus to take part in a multi-building variable air volume exhaust project. This initiative partnered with CPP Wind and Siemens Automation to reduce energy consumption from the exhaust fans by varying the speed the fans run at using a wind responsive system and adjusting based on actual building exhaust demand.

The VAV exhaust projects saves 1400 MWh annually, and has reduced the building’s electrical demand by 10%.

In 2015, with funding assistance from Fortis BC and the provincial government’s Carbon Neutral Action Fund, the Energy Conservation and Innovation team installed a heat recovery chiller. The heat recovery chiller provides the baseload cooling capacity for Life Sciences while recovering heat at a much higher temperature from the condenser water loop, offsetting the amount of heat required from the district energy system.

On average, this chiller recovers 22,000 GJ of heat annually, and has lowered the life sciences thermal energy consumption by 20%. 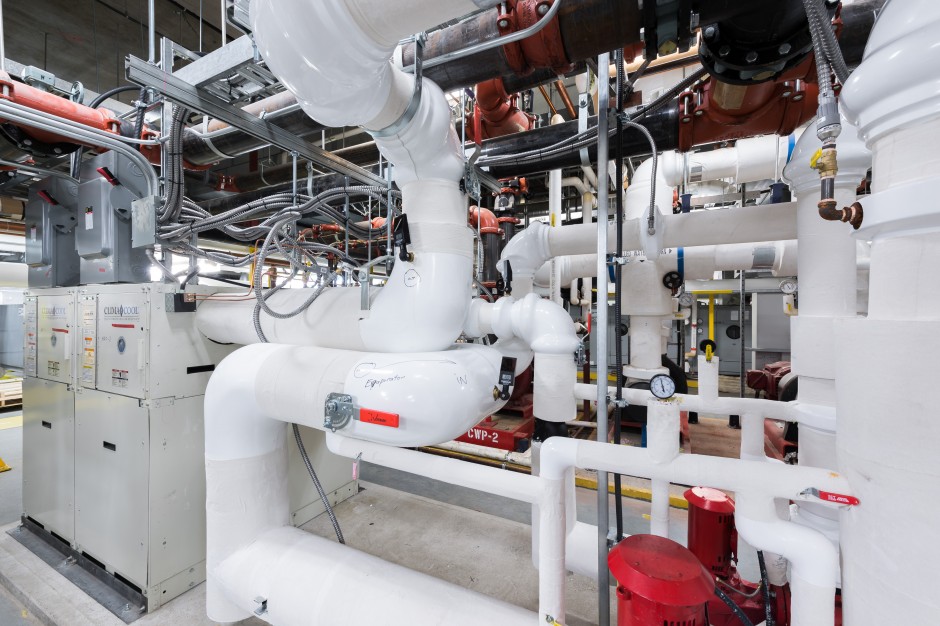 In 2013, the Energy Conservation and Innovation group identified a number of controls- and commissioning-related issues which were leading to higher energy consumption. To address these issues, we:

These seemingly minor tweaks have reduced the LSC’s total Energy Use Intensity (EUI) by 24 per cent between 2011 and 2015. This translates into cost savings upwards of $400,000 per year.