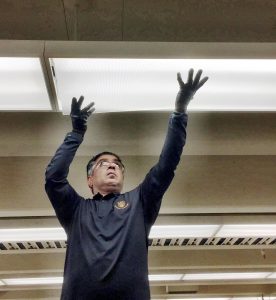 Over the last five years UBC has replaced more than 61,000 fluorescent lights with LEDs in 39 buildings. This reduces the electrical demand of the University by over 750 kW, and saves over 3 GWh in electrical energy consumption each year. The energy and maintenance savings combined with funding from BC Hydro and Province of British Columbia Carbon Neutral Program results in project payback of ~2yrs for the University.”

Energy and Water has estimated there are approximately 180,000 T8 lamps across the entire core campus. If all T8 lamps were changed to LED, UBC would reduce its electrical energy consumption by approximately 10.8 GWhs and shed 3 MW in electrical peak demand. This is the equivalent annual electricity consumption to  12,000 homes in the lower mainland. Changing out all T8 lamps on core campus would result in energy cost savings of $756,000 and $90,000 in maintenance savings each year for UBC.